Shalom Fellow Israelite,
On 12th of May 1948 a decision on the name of the newly formed State of Israel had to be voted on by ten council members. The choices were Yehuda, Tsyion, Tsabar, and Erets Yisrael.  Most assumed that it would be Yehuda, but a divine harbinger manifested in a last minute suggestion by David Ben Gurion, and that was the name “Yisrael”. Seven of the council members voted for that name, which was a prophetic sign of the future return of all the tribes of Israel.  The order of the restoration and return in Ezekiel 37 places Yehuda/Israel first, and thusly Yehuda’s dry stick became at that time a nation once again.

Perhaps you are not aware that also in 1948 a contest was held by the temporary government for a national emblem.  One hundred and sixty four individuals submitted
450 ideas. The one chosen, which the State of Israel adopted, on February 10th 1949, was designed by two brothers, Gabriel and Maxim Shamir. Their suggestion included the seven candle branch Menorah. The final draft, however, did not totally resemble the brothers’ original design, as the committee decided to incorporate a few other features into it and changed the shape of the Menorah to the one depicted in the Arch of Titus (in Rome).  The two olive branches which flank the Menorah, were meant as peace symbols, and only later were associated with Zechariah 4:11. I believe that this design was another harbinger of the restoration of the two sticks of Ezekiel 37:16. 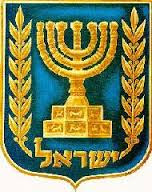 In his book The Harbinger, Jonathan Cahn makes mention of the significance of trees in the Bible.  He specifically notes the two cited in Isaiah 9:10 - the sycamore and the cedar, both in relationship to the 9/11 terror attack in New York, as being symbolic of judgments upon the United States.  In an interview about his latest book, The Mystery of the Shemitah Unlocked, he noted how Shemitah years are associated with judgments and changes, both positive and negative.  The rise and fall of nations in connection to Shemitah is one example he brings up in this book.  Hence, if the USA is indeed spiraling down, and if that began in a Shemitah year (2001), what about the rise of the nation of Yehuda in 1917 (another Shemitah), or the reconstitution of the second stick/nation of Yosef/Ephraim in the current Shemitah?   Is the latter also a harbinger of this eventuality, with the first Yehuda-Yosef “United 2 Restore” group marching in the Jerusalem Succot parade last year and then with the convening of the first B’ney Yosef National Congress on Shavuot?   Is this the Shemitah year in which the second stick/nation of Joseph/Ephraim is beginning to bud?  By the same token, should many of the harbingers of judgment be also interpreted positively, in that YHVH is going to bring back and restore the whole House of Israel?  The branch of Yehuda in the national emblem is fully leafed, but what about the second branch in that national emblem, what should it look like at this time?  Here is my rendition: 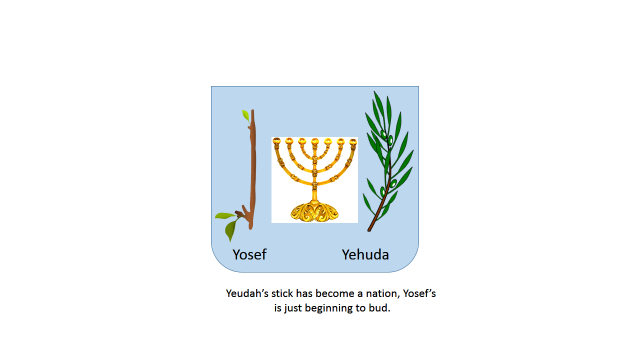 
Ephraim
Posted by Ephrimona at 2:00 AM